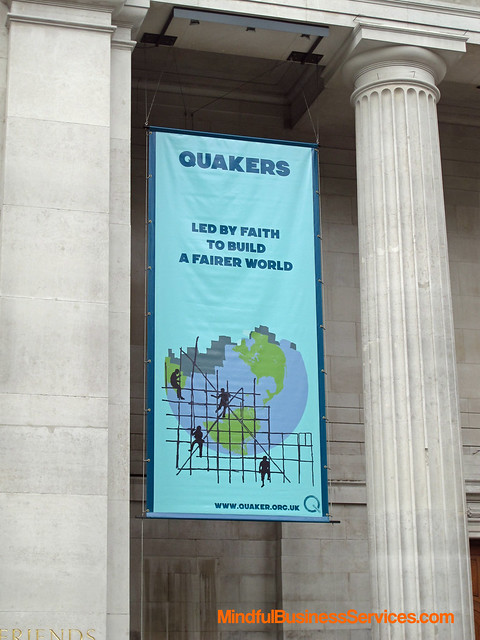 After all the long term struggles to get banners on Friends House with Camden council, I have so enjoyed seeing them go up – temporarily and now permanently. Such a good form of outreach and of brightening up the neighbourhood. Lovely to see them as I exit Euston station.

23.13 Seeking to live at all times in a divine order of life, Quakers have always counted social service part of Christianity. In fidelity to the genius of their inward experience, they have set themselves the task of developing their own spiritual sensitiveness to the light of truth; and have then resolutely confronted the unawakened conscience of the world with the demands of the new light, and have borne witness to it with undaunted patience.

This has resulted in progressive enlightenment for themselves, and in the slow but sure triumph of many of the causes of which they have become champions. The reform of the criminal law, the improvement of prisons, the suppression of the slave-trade and of the institution of slavery, the abolition of the opium traffic, the protection of native races, the repeal of the state regulation of vice, the emancipation of women, have all been powerfully helped to victory – however incomplete – by Quaker action on these lines, side by side with that of other noble-hearted reformers.

Other great ills, patent or latent in our civilisation, have yet to be overcome, perhaps have yet to be perceived; the old philanthropy has to deepen into something more vital if the full demands made by the teaching of Christ are to be obeyed; but the faithful following of the Light that illumines the alert conscience still seems to many of us the truest way for securing this deeper experience and for recognising and combating the evils that menace social and international life.

During the discussions one of my groups has been having regarding reading Qf&p, the comment was made that short passages can spark inspiration, more than slogging through some of the longer passages.

I see where that is coming from – and some of my favourites are quite short. However, there is also a power in the slow unfolding of a message and the explanations of attitudes and theories.

This passage featured in several conversations around here over the last week. That last thought that ‘other great ills, patent or latent in our civilisation… have yet to be perceived….’ is one that stops me and haunts my thoughts.

What great ills are we not aware of, or have not yet started to struggle to overcome? Climate change? Housing inequality?

The ‘yet’ brings me hope for both the perceiving and the overcoming.

This post is part of my Reading Quaker Faith & Practice series – click here for the introduction and explanation or here for all posts in this series.